It is with great sorrow and grief that we inform of the sudden and untimely passing of Dr. Panagiotis (Takis) Tsonis on September 3, 2016.
Dr. Tsonis will be remembered by many not only as an accomplished scientist- but as a man who loved his family and friends. He is survived by his loving wife Katia Del Rio-Tsonis, two beautiful daughters, his two grandchildren and his best friend and twin brother Anastasios Tsonis. 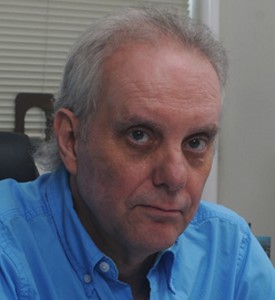 Dr. Tsonis received his primary education in Athens, Greece and his undergraduate degree in Biology from the University of Patras in 1977. He then received a competitive scholarship from the Japanese Government to pursue his higher studies at Nagoya University where he received a MS and PhD degrees in 1980 and 1983 respectively. Dr. Tsonis’ thesis and dissertation research was on the effects of carcinogens on newt limb regeneration. He was the first Greek Citizen to receive a doctorate from a Japanese University. Following his doctorate studies Dr. Tsonis moved to California where he did postdoctoral research in autoimmunity at the Scripps Clinic and Research Foundation, and research on the molecular biology of cartilage development at the La Jolla Cancer Research Foundation. Dr. Tsonis held adjunct faculty appointments at National University in San Diego and San Diego State University. In 1988 he was appointed Assistant Professor at Indiana University. A year later Dr. Tsonis was appointed Assistant Professor in the Department of Biology at the University of Dayton where he rose through the ranks to become tenured Professor in 1997. Between 2002-2006 he served as the Leonard A. Mann, S.M. Chair in the Sciences and in 2006 he became Director of the Center for Tissue Regeneration and Engineering at Dayton (TREND).

Dr. Tsonis' area of research interest was in Developmental Biology and Tissue Regeneration with focus on limb and lens regeneration. His studies were supported by numerous grants from NIH, NSF, Arthritis Foundation and several other organizations. His very innovative and pioneering work has been published in numerous, high profile peer-reviewed journals (over 190 publications) and has earned him several accolades including awards and invited lectureships. He had served in several reviewer panels including NIH and NSF and has been the reviewer for numerous journals in his area of Development and Regeneration. In addition, he served in the editorial boards of various journals including Wound Repair and Regeneration, Human Genomics, Trends in Biochemical Sciences, PLoS ONE, Regeneration and Experimental Eye Research where he served as Executive Editor. Dr. Tsonis was a dedicated scientist who believed in a teacher-scholar philosophy. The following quotation from his Faculty web site clearly demonstrates this commitment: "To me it is important to be a rigorous researcher and a good teacher. Research is important because it provides a different perspective of the natural world and therefore in teaching. My goal is to establish a UD-based legacy in my scientific field that is recognized nationally and internationally".

Dr. Tsonis was a member of the Aegean Conferences Board of Directors since the inception of the Organization. He will be missed by all of us dearly.